What are your goals and what is your action plan for achieving them?

Read on to discover several lessons from the inspiring life of Wilma Rudolph that will help you form an action plan in order to make your dreams a reality.

The Remarkable Story of Wilma Rudolph

As the doctor examined four-year-old Wilma’s twisted leg, he told the little girl that she would never walk again.

But Wilma and her family believed she could overcome all odds.

“When you come from a large, wonderful family, there’s always a way to achieve your goals,” Wilma explained. “‘I can’t’ are two words that have never been in my vocabulary.”

Not only did Wilma walk again, but sixteen years later she also competed in the 1960 Olympic games in Rome.

She became the first American woman to win three gold medals in one Olympics, and she set a world record in the 200-meter dash.

Amazingly, Wilma spent most of her childhood bedridden. Born prematurely on June 23, 1940 in Tennessee, Wilma was a sickly child and suffered from one illness after another: measles, mumps, chicken pox, scarlet fever, and double pneumonia. At four-years-old, she contracted polio. The devastating disease threatened to cripple her for the rest of her life.

But after several years of therapy, Wilma finally walked again with the aid of a metal leg brace and crutches. At nine-years-old, doctors removed her leg brace, and she wore a corrective shoe for two years. At twelve-years-old, she could finally walk unaided.

Years later, Wilma remembered: “I was challenging every boy in our neighborhood at running, jumping, everything.”

Wilma soon made the junior-high basketball team. The Tennessee State track coach saw her play in a basketball tournament and invited her to attend a summer track camp at the college. At sixteen-years-old and only four years after learning how to walk again, Wilma competed in the 1956 Olympics and took home a bronze medal.

Four years later in Rome, Wilma Rudolph was stronger and faster. Her speed stunned the globe, and she earned the title “The Fastest Woman in the World.”

Wilma’s amazing story of perseverance and success shows us three important steps for forming an action plan that will help us achieve our goals.

Strategies for Forming an Action Plan:

Have you ever heard this quote? “Always aim for the moon, even if you miss, you’ll land among the stars.” It may seem trite, but it’s true. If your dreams are small, you will only achieve small things.

If your dreams are big, they will inspire you to work harder and accomplish more. Don’t be afraid to set high standards.

Remember the story of Wilma Rudolph. Despite what the doctors told her, a crippled girl believed that her leg would heal, that she could walk again someday. She persevered and her dream became a reality.

As a young girl confined to her bed, Wilma dreamed of feeling the wind on her face as she ran through the streets of her neighborhood. But in order to run, Wilma first needed to learn how to walk again. Every step of her recovery process was a small victory.

In the words of Tom Landry (one of the greatest American football coaches of all time): “Setting a goal is not the main thing. It is deciding how you will go about achieving it and staying with that plan.”

After completing one small goal, set a new one for yourself. Track your progress in your idea journal.

Celebrate each time you reach a milestone. You may not yet be fluent in the language, but you certainly know much more than when you started.

The key is to take your abstract goals, turn them into something concrete, start working towards them today, and keep powering forward.

It’s common sense, right? If you give up, your dreams will remain dreams.

When you begin to create excuses to justify why you should quit, stop and think of Wilma Rudolph.

No obstacle is too big that it cannot be overcome.

The poet Ralph Waldo Emerson once wrote, “Whatever course you decide upon, there is always someone to tell you that you are wrong. There are always difficulties arising which tempt you to believe that your critics are right. To map out a course of action and follow it to an end requires courage.”

Do you have the courage to succeed? 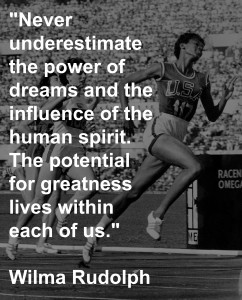 Sometimes our own personal determination is not enough. Indeed, Wilma didn’t rely on her fortitude alone. Her family also supported her.

Find family members and friends with whom you can share your goals, who will keep you accountable, and who will encourage you when times get tough. (And don’t forget to join the community here at Inkwell Scholars).

What is one of your biggest goals? Think of small steps you can take this year in order to begin making that goal a reality. In a few short sentences, share your goal in the comments section below and your newly-designed action plan. Putting your goal into words and sharing it with others is one of the most vital steps towards actually achieving it.

3 replies on “What’s Your Action Plan? 3 Lessons From An Olympian”

Thanks, Nicole, for your very inspiring post. We at Historicalpotlight.com have set a goal of providing historical videos for high school and college students on events that are rarely taught but have had an enormous impact on the formation of our country. It’s a daunting task but we feel a proper understanding of our nation’s past is extremely important for our children as they become leaders in the future. Your post has reminded us to keep our eyes on the prize and to take one step at a time.

Thanks for commenting! Looking forward to helping you produce more videos for your site. 🙂

This is great! Thanks!