Has anyone ever asked you: “If you could have any superpower, which one would you choose?”

Would you want to have lightning speed? Super strength? The ability to fly?

Of course, this is a silly question because you will never be one of the X-men or Fantastic Four or the Avengers. In real life you can’t have any of those superpowers.

At the age of 23, Ed Cooke was awarded the title of Grand Master of Memory. In order to win the title, Cooke accomplished the incredible feats of memorizing 1,000 random digits in one hour, the order of 10 shuffled decks of 52 playing cards in one hour, and the order of one deck of shuffled playing cards in two minutes or less (he accomplished the last feat in a mere 45 seconds).

Cooke is not the only one who loves challenging his gray matter with grueling memory tasks.

Amazingly, you don’t need to be a genius to perform these extraordinary mental gynmnastics.

In fact, Cooke needed only one year to coach Joshua Foer (a journalist who had no prior memory-training) to become the 2006 U.S.A. Memory Champion and win a bronze medal in the “Names and Faces” category at the World Memory Championships. Foer wrote about his experience in his New York Times best seller, Moonwalking With Einstein.

The key to Foer’s success was an incredibly simple strategy developed by Cooke and his fellow sportsmen that allows anyone to quickly and easily memorize anything, like a list of historical events and dates for a test or a string of foreign words for a language exam, and never forget them ever again.

How I Memorized the Capitals of all 196 Countries in the World in only 4 Weeks:

In 2010, Cooke co-founded a website called Memrise, which was originally targeted towards helping people learn foreign languages but eventually expanded to include many different educational courses.

I stumbled across the site this past December. Within a few hours of creating a free account, I was addicted.

I had always thought it would be incredibly cool if I could name the capital of every country in the world. Someone asks, “What’s the capital of Montenegro?” and I shoot back, “Podgorica.” Or someone tells me, “I’m from Estonia,” and I unhesitatingly reply, “Oh, do you live near Tallinn?”

Within days of beginning the country capitals course on Memrise, I could name the capital of every European country. Soon I was breezing through the capitals of North and South America, Asia, Africa, and the Middle East.

Several weeks later I discovered one of the benefits of knowing the capital of every country in the world when I was watching Jeopardy! with my family and quickly answered the Final Jeopardy statement: “One of the 3 national capitals made up of 2 words that begin with the same letter.”

“What is Addis Ababa?” I burst out. Other correct answers: San Salvador or Phnom Penh.

Memrise has also helped me memorize the location of every country (so not only can I tell you the capital of every African country but I can also pinpoint it on a map), the location and capital of each of the 50 United States, and the 50 state flags.

Here’s a bonus resource. After memorizing state and country locations, I used these geography quiz maps to test myself: http://www.lizardpoint.com/fun/geoquiz/

What should I memorize next? How about the flags of every country? The periodic table? The United States constitutional amendments?

Really, the possibilities are endless. Memrise makes it incredibly easy to memorize anything you set your mind to.

A mem is anything that helps you learn a new connection between a word and its meaning. A mem might be a photo, a mnemonic, a video, a cartoon, an example sentence, an etymology or perhaps a witty remark. Anything goes, so long as it’s relatively brief and enriches your learning.

Here’s an example. Say I am trying to memorize the capital of Cameroon. The capital is Yaoundé. I need to figure out a way to make my mind instantly connect Yaoundé to Cameroon.

You don’t need to use Memrise in order to put this trick into action the next time you want to memorize something. You can make your own home-made flashcards with index cards and use the mem trick to memorize all sorts of things, like people’s names or the meanings of foreign words.

Spaced Repetition: Of course, you can’t have a super-power memory if after a few days you forget all of the facts you’ve memorized. In Memrise, courses are seen as plants in a garden. Memrise explains: 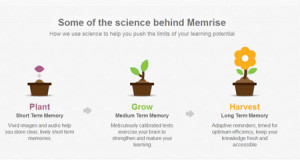 Memories, like living creatures, are born tiny and delicate. In early life they are very vulnerable, and they need time, care and a well balanced diet to grow to strength.

And even once full-grown, a memory will, like any young creature, still require regular nourishment to stay fit and healthy.

On Memrise, inspired by the organic nature of your memory, we’ve turned learning into a game where you grow a Garden of Memory. Every word begins life as a seed, you nurture it til it sprouts in your greenhouse (short term memory), and then you transfer it to your garden (long term memory). Once in long term memory, you have to water it (review it) to keep it from wilting (fading).

Memrise uses a sophisticated algorithm to let you know when a memory needs watering. This is called spaced repetition and is the only way to ensure that you will never forget what you’ve memorized. Once a fact is in your long term memory, you will only need to review it periodically.

Thus, we learn from Memrise that it’s always a good idea to review, review, review. If you’re using homemade flashcards, start out by reviewing them everyday, then every other day, once a week, every other week, once a month…you get the idea.

If you are interested in actually using Memrise, you should know that it works as a Wiki, which means that nearly all of the flashcard sets are editable. You can add your own mems or choose mems other users have uploaded.

There you have it. Combine mems with spaced repetition and you will be able to quickly and easily add facts to your long term memory.

What will you memorize today?

Thank you for the excellent resource.

[…] can read my extensive review about Memrise here. Memrise was originally created for language learners, and is a great way to supercharge your […]

[…] can read my extensive review about Memrise here. Memrise was originally created for language learners, and is a great way to supercharge your […]

I went to Memrise.com and love it! Thank you for writing this article!

One way of smart studying is mnemonic system used to memorize long lists and numbers. It bases on associating certain numbers with the words on the list. It allows me to memorize as much of content as I wish to in no time. Go take a look if you’re interested: http://guideforest.com/education/mnemotechnics-made-simple/

I’ve only used Memrise in the app and there is limited stuff that you can do without purchasing a subscription. The lifetime subscription for $139 CAN is totally worth it though.