Why is it so hard to keep New Year’s resolutions? 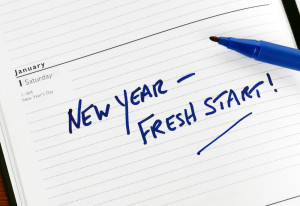 Scientific research by John Norcross, PhD (a professor of psychology at the University of Stanford and author of Changeology) has shown that “people who explicitly make resolutions are 10 times more likely to attain their goals than equally motivated people who do not.” However, those studies have also shown that come July, 60% of the people who made resolutions in January will no longer be following them.

Why are resolutions so difficult to keep?

Back in October, I wrote up a detailed post all about How to Accomplish Any Goal by implementing the SMART method. It would seem that if I had just followed my own post, I wouldn’t have broken any New Year’s resolutions.

So what went wrong??

His studies have shown that “readiness to change, or how prepared a person is to enter the action stage of behavior change, [is] the single best predictor of New Year’s resolution success.”

And that was my problem. When January came around, I was still in procrastination mindset. I loved the idea of writing weekly on Inkwell Scholars, but I kept avoiding the actual work of typing up a post.

You have to just get started.

No matter the great plans and dreams you have, you will accomplish nothing if you don’t begin.

Time isn’t the problem. The problem is procrastination.

When I fail to accomplish everything on my to-do list, I often blame it on there not being enough time in a day. I have so many different things I want to achieve — how can I possibly have enough hours to work towards all of them? But then I realize that I often waste time in that day watching YouTube videos or scrolling through Facebook or working on tasks that aren’t as important as the ones I should be prioritizing. As Benjamin Franklin once wisely observed, “You may delay but time will not.” 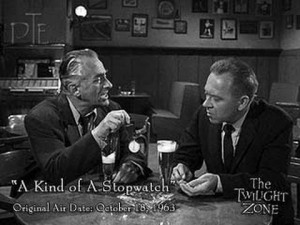 Every New Year’s Eve there is usually a TV channel playing re-runs of the classic sci-fi show The Twilight Zone. I always enjoy watching the cleverly written episodes that take something ordinary in everyday life and turn it into something extraordinarily spooky. At their heart, most of the episodes are written like morality plays, concluding with a thought-provoking observation voiced by the show’s creator, Rod Serling. Whenever I wish there were more hours in a day, I’m reminded of the episode “A Kind of Stopwatch.” Patrick McNulty is given an unusual stopwatch that he finds out has the power to freeze time. Such a watch would come in so handy when you need a few extra hours to finish a project!

Rather than using the watch productively, however, McNulty decides to use it for dastardly ends. But he ultimately learns that crime does not pay. Serling concludes the episode, remarking, “Mr. Patrick Thomas McNulty, who had a gift of time. He used it and he misused it. Now he’s just been handed the bill.”

Even though we may not have a magic stopwatch, Serling’s words ring true for all of us. Everyone has been given the gift of time. Will we be like McNulty and misuse that gift or we will use our gift wisely? 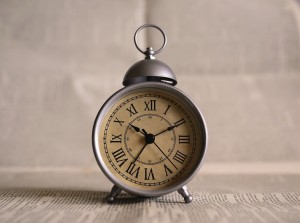 So here’s how I resurrected my broken New Year’s resolution.

I came across an article about something called the 2-minute rule. The philosophy behind it is essentially this: No matter what goals we want to work towards, just getting started is often the hardest step. We are stuck in the inertia of life, and it is difficult to change our habits.

The basic idea is to just take 2 minutes out of your daily routine to start working towards your goal. Just two minutes. That sounds insanely easy, right, even for us procrastinators?

And if I wanted to finish this post, I just needed to take two minutes each day to write one or two sentences.

But who am I kidding? Those two initial minutes soon turned into several full hours and voilà! My post is done. 🙂

Ultimately, the point is not to work towards your goal for only two minutes. The point is to take action. To roll up your sleeves and get to work.

In the end, there really isn’t any magic formula for resurrecting your broken New Year’s resolutions. The trick is to stop getting discouraged over how many days or months you’ve missed. To stop worrying about whether your post is 100% perfect before hitting publish. To stop making excuses. And to just begin.

If we let ourselves, we shall always be waiting for some distraction or other to end before we can really get down to our work. The only people who achieve much are those who want knowledge so badly that they seek it while the conditions are still unfavorable. Favorable conditions never come.

Are you willing to take several minutes out of your day to start working towards your goals? It’s never too late. Just take that first step. What will you accomplish today?

Thank you! Glad you enjoyed it. 🙂

Excellent post. I know that one of my procrastination techniques is stressing about how much time something will take, but once I start, I no longer even pay attention to the time.

Thanks, Stacey! Yes, and the procrastination just makes the task take even longer. It’s better to just get started. 🙂